What are Terpenes? A Mountain Remedy Guide to Cannabis' Aromatics

by jessica
11 months ago

Love it or hate it, the sweet smell of cannabis is unmistakable. And if you’ve ever wondered what gives weed its distinctive scent, terpenes are your answer. But, what are terpenes?

These aromatic compounds are responsible for not just the smell of cannabis but its flavor too. And recent research suggests they could even contribute to cannabis’ psychoactive and medicinal effects.

Terpenes are aromatic hydrocarbons found in all plants. As the name “aromatic” suggests, they give plants their unique smells. There are hundreds of different terpenes, each with a specific aroma and flavor. And each plant species contains a different combination of terpenes, giving it a unique scent.

Some terpenes are unmistakable. If you’ve ever savored the scent of a pine forest, you’ve got pinene to thank. If you love the sharp, zesty smell of a freshly cut lemon, thank limonene. Others are less instantly recognizable but just as important. For example, humulene helps create the bitter, earthy taste of hops.

About 150 different terpenes have been identified in samples of cannabis. And each strain contains a unique combination of terpenes. That’s why some strains smell like citrus, while others remind you of mangoes or diesel fuel.

Do Terpenes Impact the High?

Originally, researchers thought terpenes just affected the smell and flavor of cannabis. But recent research suggests it goes deeper than that, thanks to the entourage effect.

The entourage effect describes how all the compounds in cannabis work together to produce unique effects. THC, CBD, other cannabinoids, and terpenes all interact with our endocannabinoid system to create effects that wouldn’t happen with just THC or CBD alone.

It’s not yet well understood, but it’s thought that the entourage effect could change cannabis’ psychoactive properties. It could also enhance its medicinal effects. For example, one study found that full-spectrum CBD extract was more effective at treating epileptic seizures than CBD isolate.

The entourage effect is also why products like live resin are becoming popular. Live resin preserves the flower's complete terpene and cannabinoid profile, giving a more nuanced and complex high.

A Guide to the Five Most Common Terpenes in Cannabis

As we said, there are over 150 terpenes that have been found in cannabis. Most are only present in tiny amounts. But some key terpenes play a significant role in cannabis’ flavor, smell, and effects.

Myrcene, caryophyllene, limonene, pinene, and humulene are five of the most common terpenes in our favorite strains. Each has a unique scent, flavor, and maybe even medicinal benefits.

Learning about these five key terpenes is a great way to explore which terpenes you love and discover new products to explore. 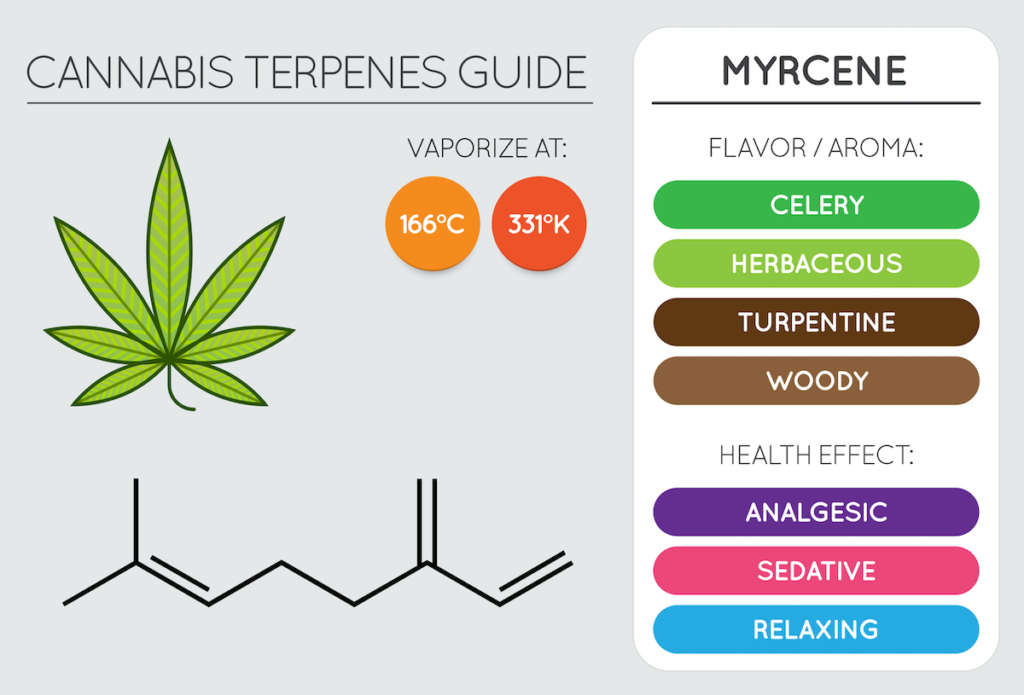 Myrcene is the most common terpene in cannabis. It’s found in more strains than any other terpene. It’s also found in hops, lemongrass, and mangoes. Its smell is spicy, sweet, and earthy.

It’s often said that myrcene is a sedative, although there’s no research proving this. One study did find that myrcene works as a muscle relaxant (in rats). There are also animal studies that suggest myrcene has anti-inflammatory properties.

Caryophyllene is found in many herbs and spices, including black pepper, cloves, and oregano. As you’d expect, its smell is spicy and warm. Strains with lots of caryophyllene hit the nose hard and can smell like diesel fuel.

Caryophyllene is unique among terpenes because it actually binds to our endocannabinoid system. Researchers have found that caryophyllene can relieve pain and inflammation in animals. Some also think it can reduce anxiety, although there’s no research backing this up so far.

Choose sour, spicy strains to test out caryophyllene. We love Bloom Farms Sour Diesel flower and Bloom’s GSC Disposable Vape, both classic, much-loved strains. Other strains in the Cookies and Kush families contain lots of caryophyllene, too,  including Bubba Kush and Cookies and Cream.

Again, it’s not hard to figure out what pinene smells like. Its earthy scent is unmistakable. But it’s also found in herbs like basil and rosemary as well as in pine and other conifer trees.

Pinene has been investigated for its potential anti-cancer and anti-inflammatory properties. It also helps open airways, which could be useful for people with lung problems. A study on mice also found pinene could reduce anxiety, which might explain why smelling pine leaves feels so good.

There aren’t many strains where pinene is the dominant terpene, but it's often a secondary terpene to myrcene or caryophyllene. One exception is Big Smooth, a pinene-dominant strain. Another popular pinene strain is Blue Dream. 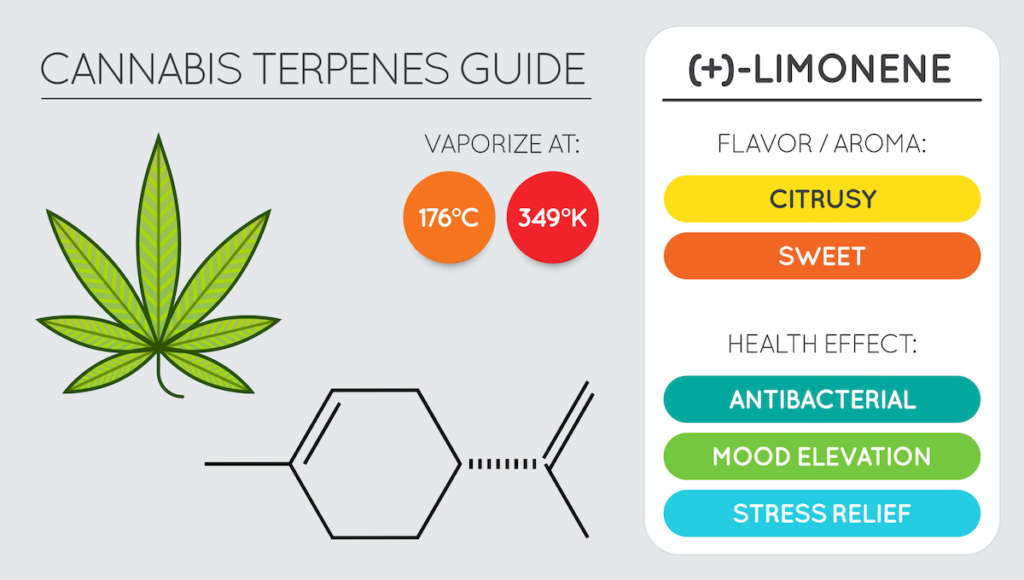 You can probably guess how limonene got its name. This bright, fruity terpene is found in the rinds of citrus fruits like lemons and oranges, and you can’t miss it. Strains with high limonene content smell fruity and fresh (but not always like lemon).

We’re still learning how limonene affects our bodies, but there are some exciting possibilities. Researchers have explored its potential to improve our immune system, act as an antibiotic, and improve our mood. There’s even some evidence it could slow down tumor growth.

Finally, humulene is the terpene that gives some cannabis strains a hoppy scent. It’s most commonly found in hop. So it's no surprise that some strains smell like a great craft beer. Humulene can also be found in many herbs and woody plants.

Humulene’s medicinal benefits are better understood because it is found in many therapeutic essential oils. Research on essential oils has found anti-tumor and antibacterial properties of humulene.

Like pinene, humulene isn’t often the dominant terpene in cannabis strains. But it can be found in many earthy, spicy strains. Some good examples are Thin Mint Cookies and Candyland. Afghani Cookies is another popular strain where humulene plays a role.

What are Terpenes? The Key to Your Favorite Strains

Understanding terpene and cannabinoid content is much more helpful than simply knowing whether a strain is an indica or a sativa. Now that you know a little bit about terpenes, you’ll find it easier to order cannabis online and choose new strains that you’re sure to love.