by jessica
1 month ago

Thanks to technological advancements and an adventurous consumer base, you have a variety of cannabis concentrates to choose from for your next dab. Live resin vs shatter are just two of many extracts available.

How are they similar and different? Which one gives you a better or more potent high? Is shatter vs live resin suitable for ganja newbies, or should only the “pros” take a dab?

What Is Live Resin?

Live resin is like the superhero of all ganja concentrates because you can taste the flower and it’s potent. It has a rough, paste-like consistency; however, stoners say it has a saucy, waxy texture.

Live resin is made using a flash-frozen process to help preserve all the terpenes and trichomes, making this white or pale yellow concentrate flavorful and fragrant.

Use it in a dab pen or rig because of its wet, sticky consistency.

Interestingly, other concentrates are named for their appearance or consistency, but live resin is named for how it’s made.

Shatter falls under the cured resin umbrella because it’s also made from dried cannabis plant material.

This concentrate’s name is apt: Shatter looks like thin, delicate glass with some air bubbles, and when you drop the extract, it shatters – just like glass. It’s golden or amber and semi-translucent.

What Are the Major Differences Between Live Resin vs Shatter?

While there are some similarities between how live resin vs shatter is made, one of the most significant differences is the starting point. 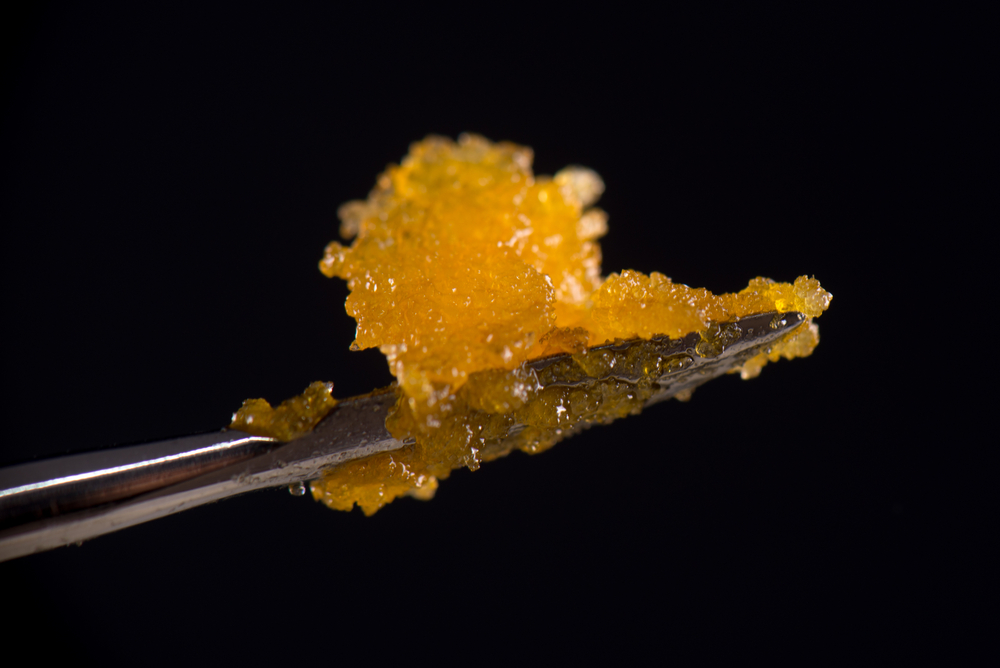 The living weed elements are flash-frozen using dry ice or nitrogen. This technique preserves all the active cannabis compounds so you can taste and smell the weed from which the live resin was made.

From there, the frozen buds are soaked during a chemical process lasting a couple of weeks. During this time, the terpene oils stick to the butane or another solvent while cannabinoid crystals form. As a result, the oils and the crystals separate.

When ready, the solvent is removed, and the live resin is created by mixing the crystals and terpene sauce.

Once the flowers and buds are dried and cured, they’re soaked in a solvent to separate the terpenes, THC, and other cannabinoids from the cannabis plant.

When these compounds have separated, the liquid is strained and purged (or cooked) to remove the solvent. The liquid solidifies when it cools, resulting in a glass-like shatter sheet.

The texture of live resin and shatter couldn’t be more different. You can see the wet crystals of live resin’s waxy, saucy consistency. It’ll probably remind you of sugar.

When you hold shatter, it’s a glass-like shard with trapped air bubbles. It looks hard, but it’s actually brittle and breaks easily. 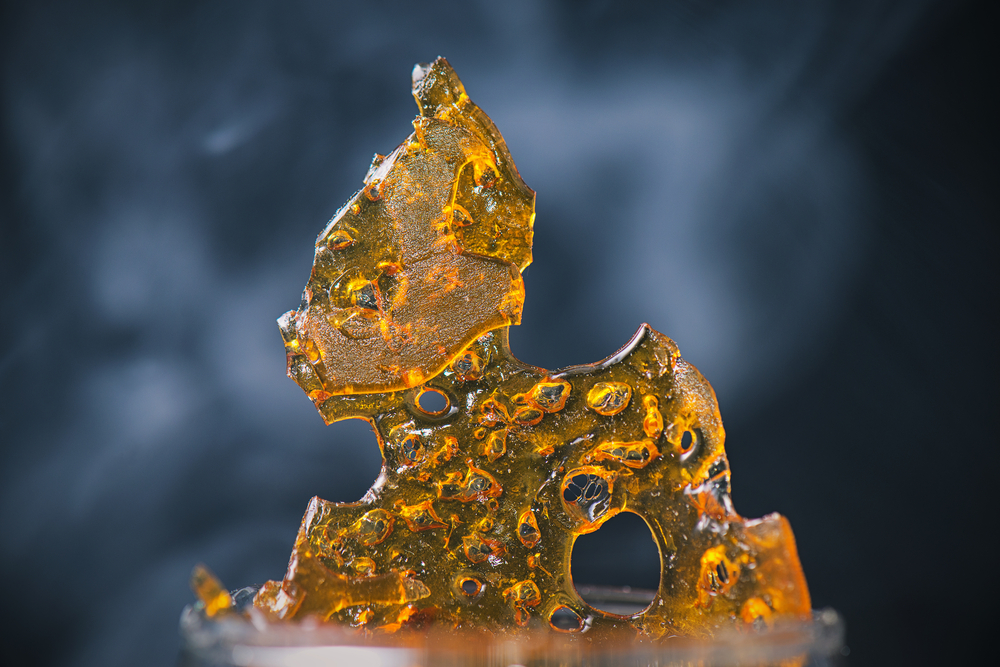 shatter is delicate, golden, and glass-like[/caption]

Live resin is more potent because it generally has a richer THC content at 90 percent or higher. Real live resin products have 50 percent to 90 percent THC.

On the other hand, shatter is also potent, but less so since it has approximately 80 percent THC content. Shatter products have 50 percent to 80 percent THC.

Because of how live resin is made (flash freezing the flowers before the cannabis oil is extracted), it’s rich in terpenes, cannabinoids, essential oils, and flavonoids.

As a result, the taste and aroma of the cannabis flowers are preserved, and this is why live resin is incredibly pungent.

Shatter has a low terpene profile because the concentrate is purified and filtered via a chemical process, destroying some flavonoids and terpenes.

Shatter is darker in color, like golden honey or amber, while live resin is much lighter and ranges from white to pale yellow.

Expect a fruity candy flavor that pairs well with the relaxing and tension-releasing high that will set in. Enjoy White Runtz when you chill out by the TV or need a dessert high.

Hybrid’s GSC shatter is a hybrid strain containing 75.92 percent THC. The honey-colored shatter is a cross between Durban Poison and OG Kush.

GSC shatter has an earthy yet sweet aroma. With this shatter, you can let your whole body relax and your mind trip out on a complete euphoric feeling.

The sativa-dominant STIIIZY’s curated live resin in berry pie tastes and smells of sweet berry notes. Choose this live resin when you want to keep your day moving forward while enjoying a 77.89 percent THC uplifting high.

The CG4 Shatter by Tutti is potent with 75.85 percent THC. You'll be hit with an intense relaxation and euphoric feeling when dabbing with this concentrate.

Remember to use this shatter when you plan to chill, as you'll feel utterly glued to your couch. The CG4 has a sour and sharp, earthy smell.

It’s not easy to choose a concentrate when you want to start dabbing, and even the pros may find it challenging to pick shatter vs live resin for their next high.

One thing’s for sure, though: These concentrates are potent so they may be better suited for those experienced dabbing hands.

Nonetheless, only you can decide what’s better for you. Live resin vs shatter, anyone?

by jessica
7 days ago
Read More

by jessica
18 days ago
Read More

by jessica
21 days ago
Read More